Airshow photography at best can be quite a challenging pursuit.  Sadly, in the UK since the Shoreham airshow disaster, it seems that the aeroplanes are flying much further away from the crowds. This makes a lot of sense for safety reasons. However as a budding airshow photographer, this also makes it harder to capture those all impressive shots.

So how is it possible to walk away with some great looking images with only minimal kit?  Below are some ideas to help out.

1). The first thing to do is accept the advantages and the limitations of the equipment that you are using.  A 200mm lens is possibly the least requirement for an airshow.  This is not to say it is impossible to get reasonably creative shots from an iPhone or similar camera phone.

The following photograph shows a 200mm Nikon kit lens (bottom of image) flanked by the type of lens (a Sigma 150mm-500mm) that would have been useful to take on an airshow shoot. 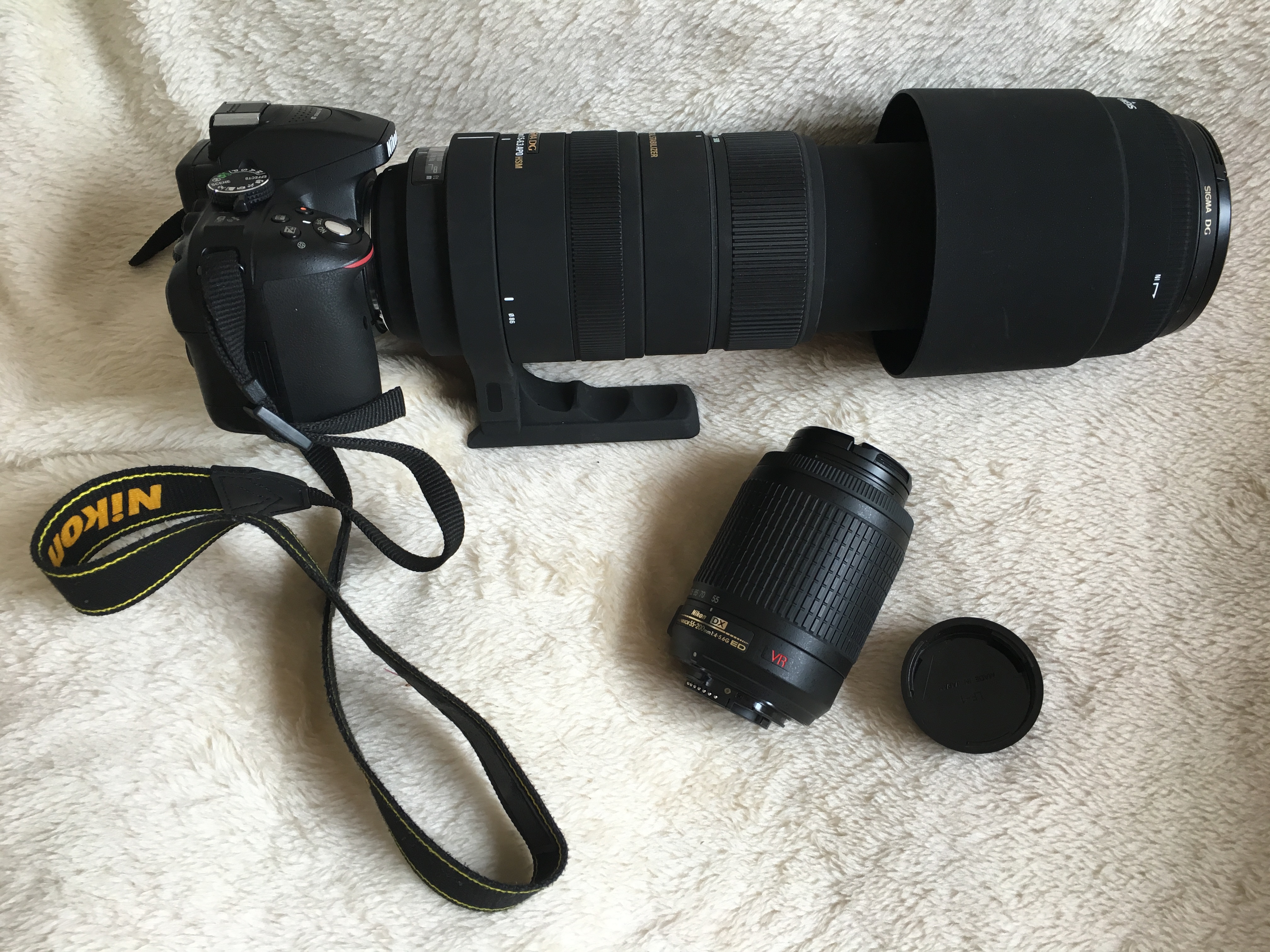 The Sigma 150mm-500mm is a great lens for airshow photography, but one thing that makes the 200mm lens ideal is its size and weight.  Having a camera lens that is light allows for freedom of movement to capture those all important shots.

A 500mm lens might be great for zooming in close to capture detail, but at the same time weight can be an issue.  There are special halters that can help with this.  I would recommend looking into this if you are serious about using these heavy lenses for any length of time.  The 200mm lens however is relatively light and will zoom and focus quite quickly.  Focussing is important as it is frustrating to miss a good shot if the camera’s fails to focus quickly.  Sometimes a longer lens can take a little longer to find its focus, so there may be some ‘trade-off’ here.

2). Understanding the limitations of a 200mm lens means that it is vital to work creatively.  A 200mm lens can never capture the details of a 500mm lens, therefore composition becomes much more important. 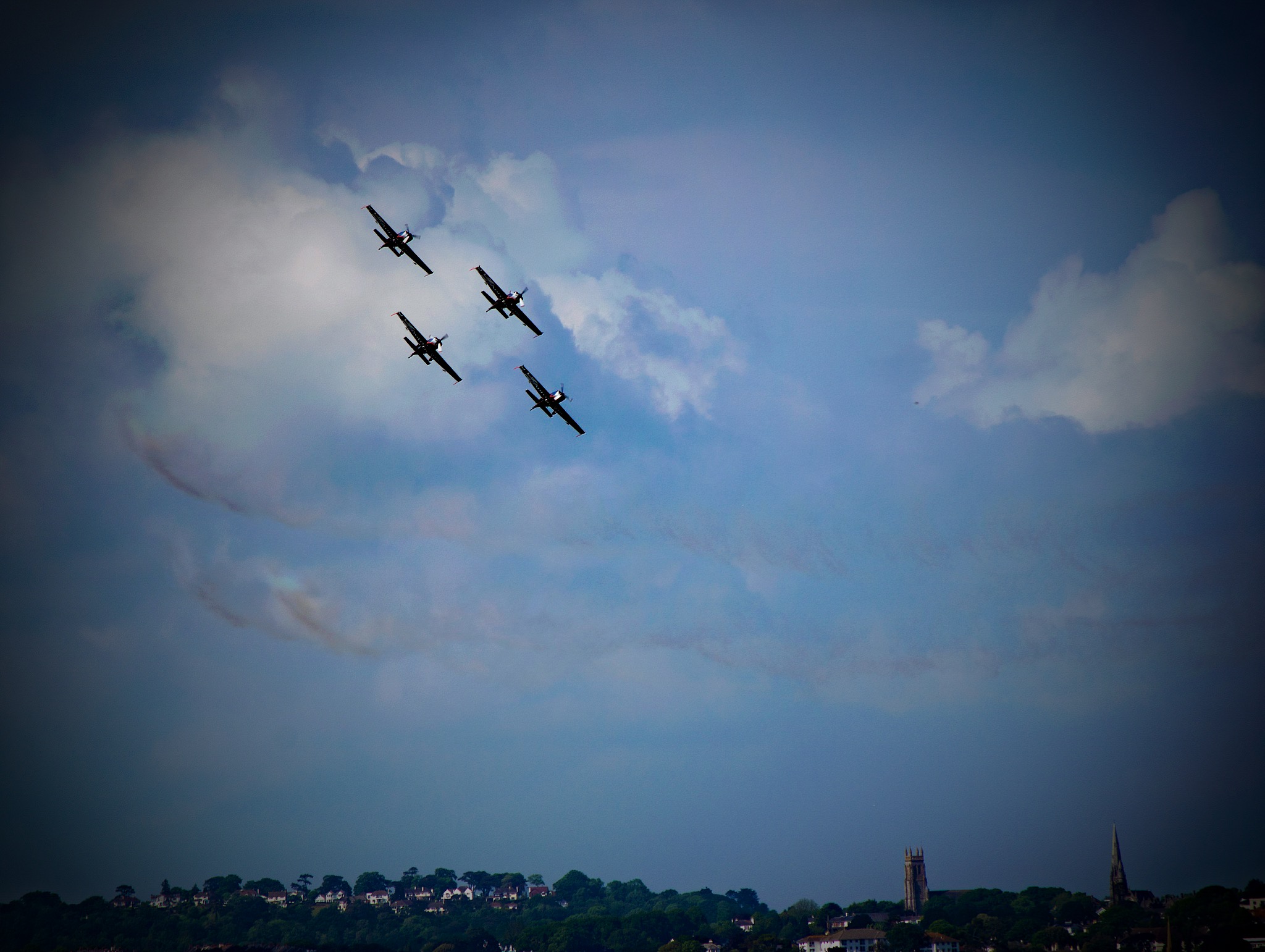 A formation of planes in the distance, set against a backdrop of clouds

3). Try to capture something a little bit ‘quirky’ or out of the norm.  It is important to remember that creatively quirky shots can sometimes be just as impressive and expressive as highly detailed shots taken with a longer lens.

The image below shows a little ‘thinking outside of the box’.  In the picture below, even though the plane is some distance away, the use of negative space still draws the eye. 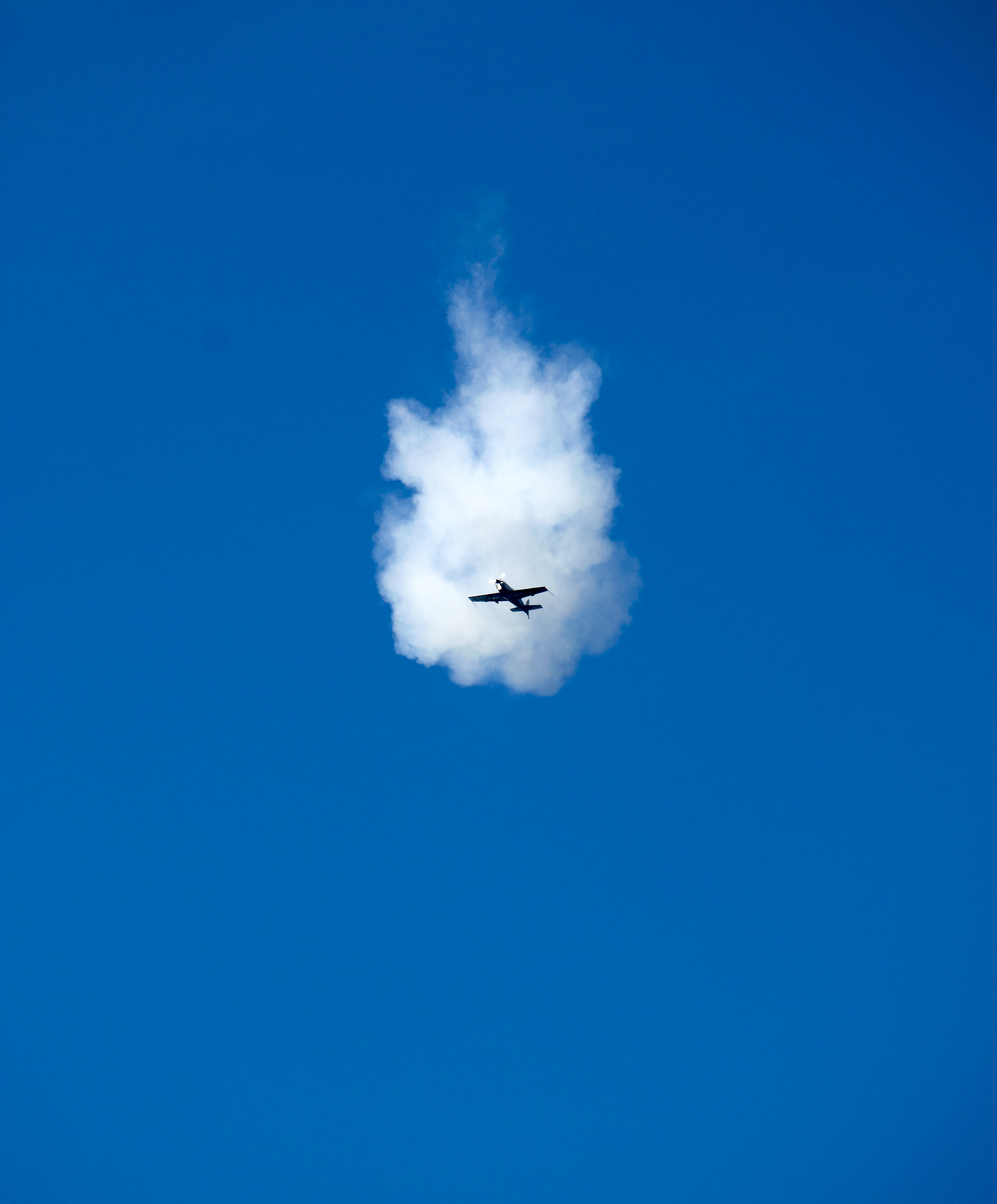 A Plane flies in front of a cloud. An example of the use of negative space leading to a ‘quirky’ shot.

The white cloud in contrast to the blue sky and black plane, almost makes the cloud look like cotton wool.  Always consider how to frame shots that may otherwise may not have been taken.

4). Sometimes the planes are not the most interesting part of the picture.  When faced with shots of tiny planes with little or no detail, it may be time to focus on patterns and contrails.  One of the great things about airshows is not just the planes but the trails they leave behind.  When shooting with a 200mm lens it is important to remember the smoke trails or contrails.

In the shot below the contrails make up most of the image.  The strong harsh, contrasting white lines against a blue back drop means that the focus is on the composition.  The lack of detail on the planes now becomes less of an issue with the focus of the image on the smoke. 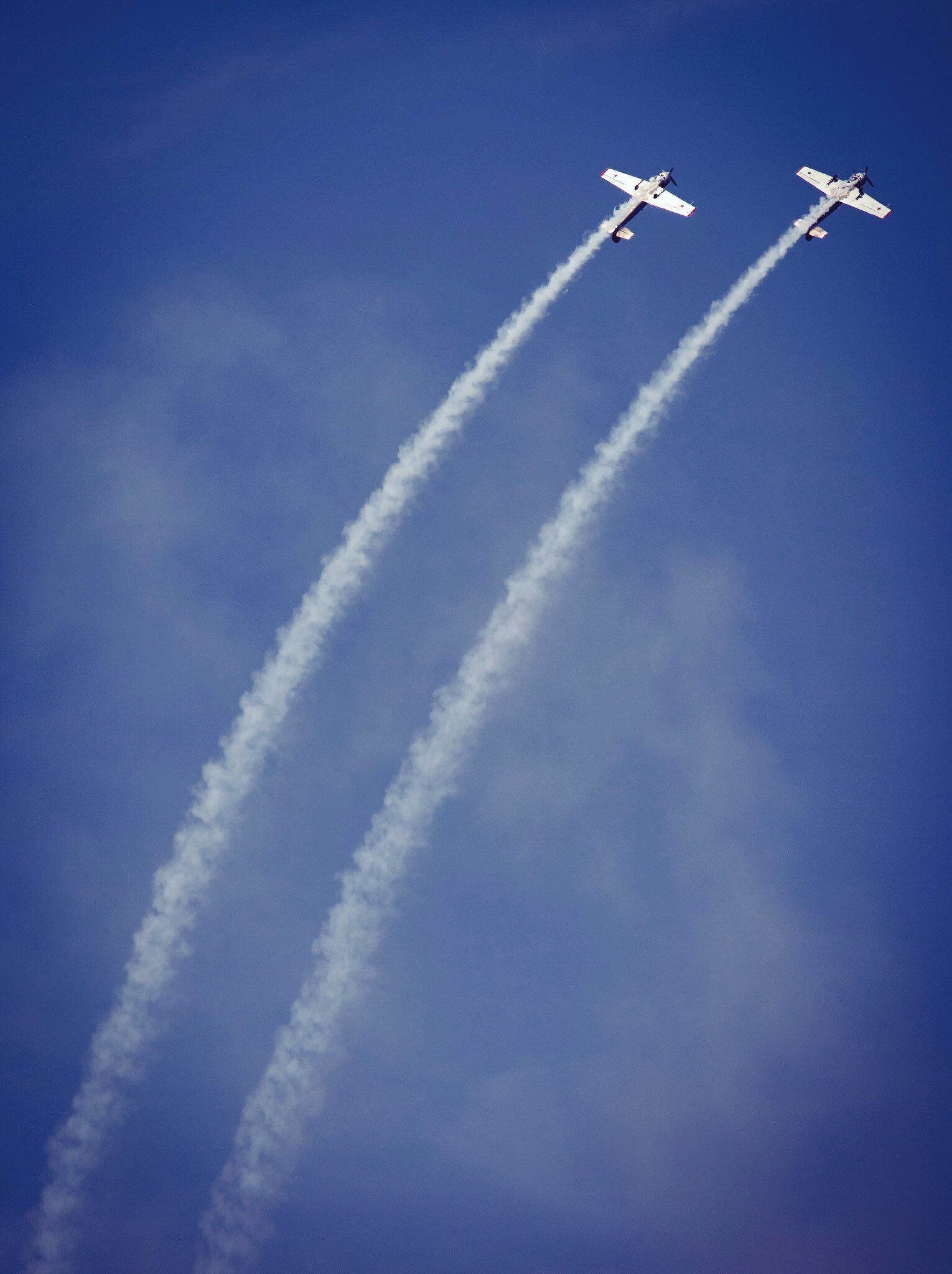 Contrails sweeping across the sky are more important in this image than the planes themselves.

5).  The final piece of advice is don’t get too worried if the planes look too far away in the viewfinder.  Modern photo editing software e.g. Photoshop or Lightroom allow for the ‘cropping into’ of an image.  This is a simple procedure where the image is blown up in editing software to where details begin to show and then cropped accordingly.

The image below shows the Tobay Airshow’s amazing Wingwalkers.  Sadly because the planes were so far away it is only barely possible to make out the ladies on top of the planes. 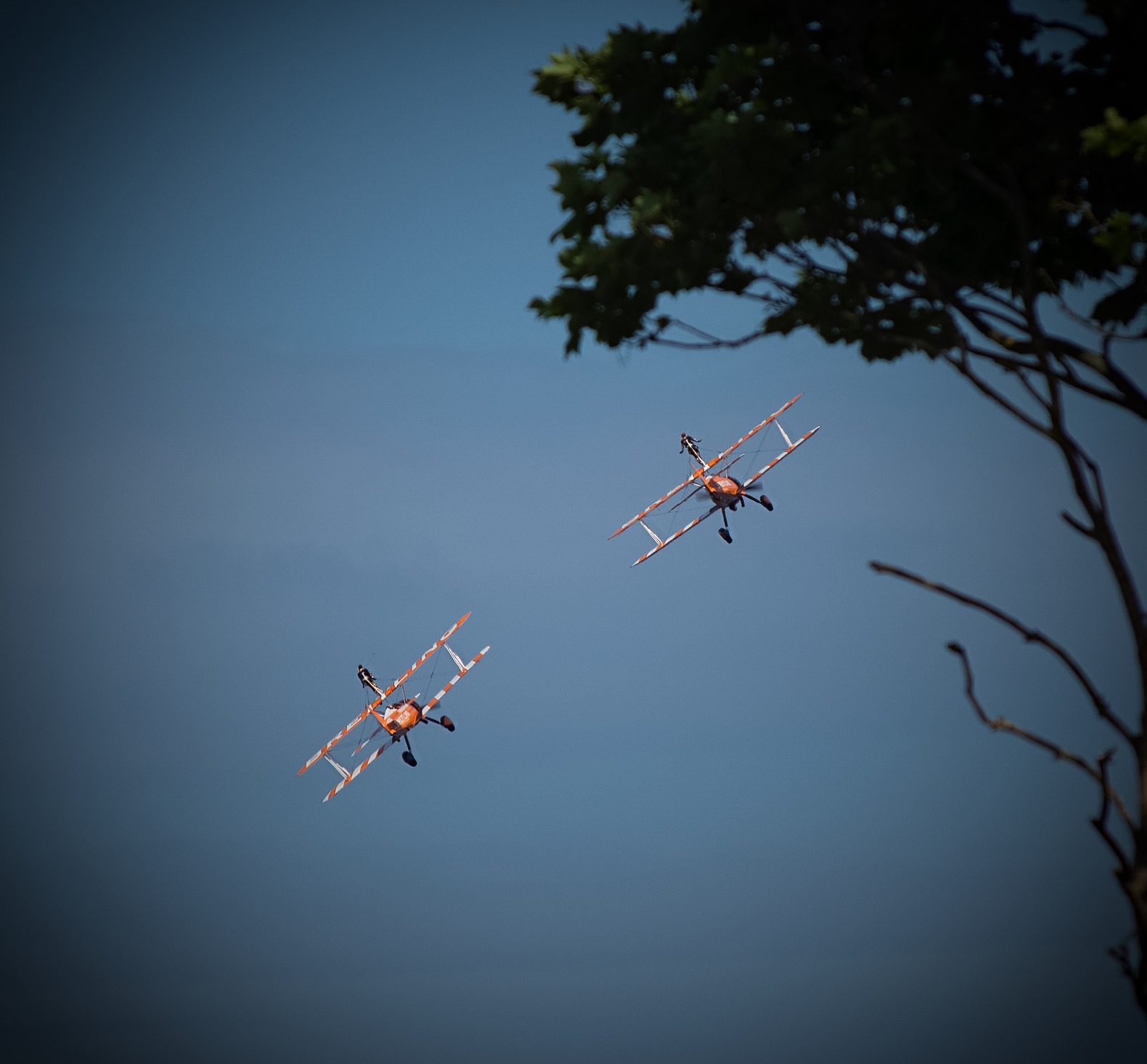 A shot of the Wingwalkers at the Torbay Airshow taken with a 200mm lens at full zoom.

The image below is of the same Wingwalkers shot at full zoom in the same way as the image above.  This time the image has been ‘cropped into’ using Photoshop.  Notice how much more of the detail is now observable in comparison to the shot above.

The wingwalker details have been found in this image by zooming in and cropping. Photoshop was the editor of choice for this image.

It would have been possible to have cropped in a little further to bring out even more detail.  However there would have been risks to image quality. Therefore, for creative reasons the shot was left as it is.

The above five points are great ways of still walking away from an airshow with interesting images.  Longer lenses are great and would be perfect for an airshow, but sometimes cost is prohibitive.  For this reason, next time you visit an airshow consider the points above and you should be able to walk away with some pretty decent work.

Please visit the gallery below to see more of the shots from the airshow.

About the Author: karyn

Sorry, the comment form is closed at this time.